Documentary about the filming of the 1998 Stijn Coninx-film 'When the Light Comes'. The film was shot in the extremely cold town of Spitsbergen.


A small town advertising agency in Nebraska prepares a commercial for a dog grooming company.


Patricia doesn't know it, but the three abstract shapes she created to keep herself entertained in her boring job as an animator at global 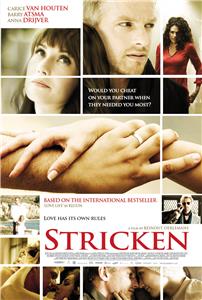 Handsome Dutchman Stijn is the star of an advertising agency with his buddy Frenk and a hot womanizer. The boys start their own agency and Stijn marries colleague Carmen, who accepts his incurable greed for truly meaningless one-night-stands. Even fatherhood and a move to the boring country go well, until Carmen gets breast cancer. Now their lives are turned upside-down, maybe wrecked.


When author Kluun was asked if he wasn't worried that a first-time director would be adapting his book, he simply replied that he was a first-time author when he wrote it.

The story as adapted from the novel by Kluun is partially autobiographical. In fact, some family members of Kluun's deceased wife (played by Carice van Houten in the movie) are present in the wedding celebration scene.

The Dutch title (Komt een vrouw bij de dokter) actually means "a woman goes to the doctor", which is the opening sentence of many jokes.

Directorial debut of Reinout Oerlemans, who, up until that point, was primarily known as an actor in soap operas and producer of TV shows.

In the movie Carmen goes to a grave yard to find herself a "nice place". When she is there she walks past a grave thats says 'Carpe Diem, Judith van der Klundert'. The personage Carmen is based on Judith, who is the wife of author Kluun.