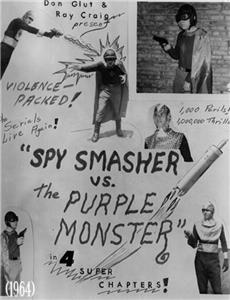 Traveling from Mars, The Purple Monster (played by Ken Henricks) , along with his henchmen, plan to take over the world. The Earth's best defense is Alan Armstrong (played by Don Glut) as the Spy Smasher. Through this exciting four part serial, Armstrong battles The Purple Monster, with each part ending on a cliffhanger, Armstrong in a life and death struggle to save himself. {locallinks-homepage}


The title is announced as "Spy Smasher Strikes".

This serial featured a character Spy Smasher, who had originated in comic books and the other from a couple of Don Glut's favorite serials made by Republic Pictures and which inspired Don Glut's own unofficial company name Democracy Pictures.

This was to be the last film made by Don Glut entirely in the Chicago area.

Don Glut cut a trailer for this serial narrated by Jim Harmon.