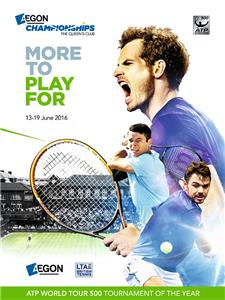 
The event is part of the ATP World Tour 500 series on the Association of Tennis Professionals (ATP) Tour.

For many years previously it was known as the Stella Artois Championships.

Queen's is one of the most prestigious grass court tournaments, as well as one of the oldest Tennis tournaments in the world, and serves as a warm-up for Wimbledon.

Andy Roddick has called the courts at the Queen's Club "arguably the best in the world".

Originally known as the London Grass Court Championships, the tournament traces back to 1884 when a tennis tournament was held at the London Athletic Club at Stamford Bridge, Fulham.

In 1885 the tournament was given the title of the London Championships, and it was held outdoors, on grass.

In 1890 the tournament moved to its current location, the Queen's Club and consisted of a men's and women's singles event.

Between 1970 and 1989 the Championships were part of the Grand Prix tennis circuit.

The event is currently an ATP World Tour 500 series tournament on the Association of Tennis Professionals (ATP) Tour and was upgraded from a ATP World Tour 250 series in 2015.

During the 2004 singles tournament, Andy Roddick set the then world record for the fastest serve recorded at 153 mph (246.2 km/h) during a straight-set victory over Thailand's Paradorn Srichaphan in the quarter-finals.

The Queen's Club Championships are held every year in June.

The Championships start one week after the clay-court French Open and conclude one week before the start of the grass court Wimbledon Championships, which are held just 4 miles (6 km) away.

Up to 2014, the break between the French Open and Wimbledon was just two weeks, and the Queen's Club Championships started the day after the French Open's men's final.

Grass courts are the least common playing surface for top-level events on the ATP Tour. The 2009 schedule included only four grass court tournaments in the run-up to Wimbledon. They were the Queen's Club Championships, Gerry Weber Open, Eastbourne International, and the Rosmalen Grass Court Championships. An additional tournament is played on grass in Newport, Rhode Island, USA, in the week immediately after Wimbledon.

The championships were founded 126 years ago.

Bulgarian Grigor Dimitrov was the 2014 champion.

Most titles has John McEnroe (4 singles and 1 doubles).

Longest final was between Sampras beat Henman in 151 minutes in 1999.

Shortest final was between Stich beat Ferreira in 57 minutes in 1993.

22 of the last 25 Wimbledon champions have played at the Queen's Club Championships.

The highest total attendance for the week was in 2003, when 52,553 people attended the event.

Lowest-ranked finalist - Laurence Tieleman, ranked 253 in the world in 1998.