The Impressions sing "I Need You" and "It's All Right." Sonny Bono sings "Laugh At Me." 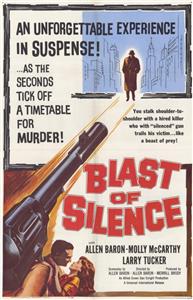 Having been 'away' for some time, professional killer Frankie Bono returns to New York to do another job: assassinate some mid-level mobster. Although intending to avoid unnecessary 'contact' while carefully stalking his victim, Bono is recognized by an old fellow from the orphanage, whose calm and unambitious citizen's life and happy marriage contrast heavily with Bono's solitary and haunted existence. Exhausted and distracted, Bono makes another mistake, but his contract is not one to back out of.


Part of the movie was shot during the middle of a real hurricane - the wind seen during the fistfight is not artificial. It was filmed on Long Island during Hurricane Donna (September 10-12, 1960), the only hurricane of the 20th Century to strike the entire East Coast from south Florida to Maine.

Allen Baron originally offered the role of Frank Bono to Peter Falk as a friend for no pay. Falk seriously considered it, but declined when he was offered a paying gig.

The beginning, which shows a train emerging from a tunnel, is what would have been seen in a train *leaving* New York. The train, with its magnificent GG1 electric locomotive, emerges from the tunnel and is seen in Newark's Penn Station. Trains do not burst into the light (an important metaphor in the film) entering New York City, but arrive at dark, underground platforms. However the now-demolished sky lighted departure hall of New York's Penn Station is seen. Trains between Cleveland and New York generally traveled over the New York Central line and arrived at Grand Central Terminal.

Frank is staying at the Valencia Hotel on St Mark's Place in the Bowery on the lower East Side of New York City.