Ariel X is one of the most dominant in Ultimate Surrender history but this season she's had nothing but losses. Can she turn it around here?


For the first time ever Dragonlily and Annie "The Scorpion" Cruz lock horns on the mat. 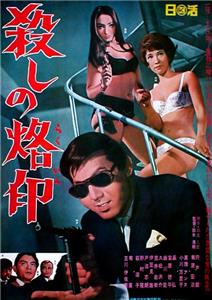 The number-three-ranked hit-man, with a fetish for sniffing boiling rice, fumbles his latest job, which puts him into conflict with a mysterious woman whose death wish inspires her to surround herself with dead butterflies and dead birds. Worse danger comes from his own treacherous wife and finally with the number-one-ranked hit-man, known only as a phantom to those who fear his unseen presence.


When Nikkatsu studio executives saw the finished product, they thought it was too terrible to be released, so they shelved it. Director Seijun Suzuki along with others in the film business, film critics, and students protested in unfairness since by contract Nikkatsu was supposed to release the finished film theatrically. It went to court, with a ruling in favor of the director. Nikkatsu had to pay for damages and have the film released. Suzuki's contract with Nikkatsu was terminated, and with the bad reputation, was unable to work on a feature film for the next 10 years.

The film was edited in only one day.

Seijun Suzuki explained that he wanted to present a quintessentially Japanese killer, by having him develop a habit for sniffing rice: "If he were Italian, he'd get turned on by macaroni, right?"

No professional actress was willing to take the role of Mami since she would be fully naked and foolish, so the role was taken by burlesque dancer Mariko Ogawa. It was her only film role.

According to Annu Mari, what attracted her to the role of Misako was her morbid attitude because she was going through suicidal depression at the time of filming.

Post-production was completed on June 14, 1967, the day before the film was released.

For nude scenes the actors wore adhesive strips over their genitals, in accordance with censorship practices.

Seijun Suzuki originally wanted Kiwako Taichi for the female lead but she had taken a part in another film.

This film is part of the Criterion Collection, spine #38.