Henry and Fay's son Ned sets out to find and kill his father for destroying his mother's life. But his aims are frustrated by the troublesome Susan,

The Winds of War Into the Maelstrom (1983) watch online 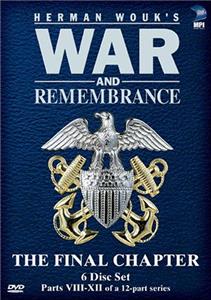 The saga of the Henry family, begun in "The Winds of War" continues as America is attacked by Japan and enters World War II. For Victor Henry, an upwardly mobile naval career sets him in command of a cruiser with sights on selection for the Admiralty. At the same time, however, Victor must struggle with a failing marriage as well as a love affair with the daughter of a prominent British radio news reporter. Victor's son Byron has equal success as a submarine officer, eventually selected to command his own ship, yet all the while must deal with the separation of his wife and son who are held in German custody as enemy alien Jews. Through other such characters as Professor Aaron Jastrow, Naval Pilot Warren Henry, and the noble German General Armin von Roon, "War and Remembrance" unfolds into an all encompassing and fascinating story of the Second World War.


The producers considered replacing seventy-year-old Robert Mitchum with fifty-nine-year-old James Coburn, due to concerns that Mitchum was too old and ill to reprise the role of Victor "Pug" Henry.

The series performed disappointingly in terms of viewing figures compared to The Winds of War (1983).

Most Captains in the U.S. Navy were in their thirties or forties during World War II. Robert Mitchum turned seventy during the filming of this mini-series.

Ralph Bellamy was eighty-three when he played President Franklin D. Roosevelt, who died at the age of sixty-three.

During a break in filming, Robert Mitchum played a role intended for John Huston, who was dying of pneumonia and emphysema, in Mr. North (1988).

Costing over one hundred ten million dollars, it was, at the time, the most expensive mini-series ever.

In the "death camp" segment, there is a shot of several nude "bodies" showing women's breasts. This was the first time that nudity was shown on network television in primetime.

Paramount Pictures, who financed The Winds of War (1983), passed on financing this sequel, so ABC paid for it.

The scenes at Hitler's Reich Chancellery in Berlin, were shot in and around the Hofburg Palace in Vienna.

The mini-series failed to attract young audiences when it was shown in North America.

Pat Hingle served in the U.S. Navy, in the Pacific Theater, which means he served under the command of Admiral Halsey, who he played in this mini-series.

The mini-series was criticized for downplaying Soviet atrocities. The Soviets had invaded Poland and Finland in 1939 before invading the Baltic States in 1940.

President Franklin D. Roosevelt and Prime Minister Sir Winston Churchill were played in this mini-series by Ralph Bellamy and Robert Hardy, respectively. Both actors had played those roles in movies as well. Bellamy played the role in The Winds of War (1983) and Sunrise at Campobello (1960). Hardy played Churchill in Winston Churchill: The Wilderness Years (1981), The Woman He Loved (1988), and Bomber Harris (1989). The first of those films also featured Günter Meisner as Hitler, a role he also played in The Winds of War (1983). Hardy has also played President Franklin D. Roosevelt.

When this mini-series was shown on the ITV network in the U.K. in the late 1980s, several of the graphic concentration camp scenes were shown out of sequence. This was to ensure they were transmitted after the 9:00 p.m. "watershed". There is an unwritten rule that potentially "offensive" images are never shown before this time.

Byron ultimately finds his son Louis in England, courtesy of a Royal Air Force program to find adoptive homes for Jewish orphans. That program existed in real-life. Jane Seymour's first husband, Michael Attenborough, had two aunts who were adopted through the program.

Sir John Gielgud took over the role of Aaron Jastrow from John Houseman. Gielgud was one of several actors who passed on the role of the law professor in The Paper Chase (1973), before Houseman was cast.

The authenticity of the selection scenes at Auschwitz were helped by several former inmates of the camp, who were given advisory roles and appeared as extras, thus reliving their own experiences more than forty years later.

Although the U.S.S. Northampton is portrayed with the second main gun turret located aft of the bridge, which is incorrect, all of the World War II U.S. heavy and light cruisers that could have portrayed the ship had either been scrapped; converted and scrapped; mothballed; or preserved as a museum ship. It appears that a ship was offered for use during filming, and had to be converted. The ship used could not have physically had a second main gun turret included forward, as this is pretty obvious, so it had to be added to the aft section behind the bridge.

This was the first production to be filmed on-location inside Auschwitz, after Dan Curtis lobbied the Polish Communist government for permission to film. A full scale replica of Krematorium II was built alongside the original site, as the building had been destroyed by the Nazis at the end of 1944.

Edmund Pegge believes he was not asked back to play Burne-Wilke because of a blunder with a pipe during filming of The Winds of War (1983), so the role was given to Michael Elwyn instead.

Geoffrey Beevers was cut out of this mini-series.

The role of Werner Beck was offered to Ronald Lacey.

Jane Seymour took over the role of Natalie from Ali MacGraw. Both of them were connected by marriage to a star of The Great Escape (1963). MacGraw was married to Steve McQueen, and Seymour was married to Michael Attenborough, son of Sir Richard Attenborough.

Brian Blessed said on a U.K. chat show, that he was initially offered one of the Auschwitz roles, maybe the John Rhys-Davies role. but turned it down, as he thought it would be too depressing.

Jane Seymour and Hart Bochner previously played mother and son in East of Eden (1981). In The Winds of War (1983), Natalie quips to Byron that she must remind him of his mother.

Aaron Jastrow mentions that he receives coffee from Bernard Berenson, who is never seen. Berenson was actually a real person, an American Jewish expatriate, art historian, convert to Christianity, and a major inspiration for Jastrow's character.

According to the story, Natalie Jastrow, Pamela Tusdbury, Leslie Slote, and Phillip Rule all once shared a flat together in Paris before going their separate ways. Pamela is the only character of the four to have a scene with Phillip Rule, she only appears in one scene with Leslie, and never has a scene with Natalie.