South Africa stands beneath the shadows of overwhelming statistics of rape, abuse, violence and substance abuse, threatening to suffocate the voice 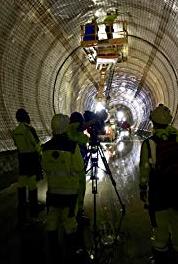 In Johannesburg, South Africa, engineers are less than 2 years away from delivering South Africa's first new commuter rail line in four decades. It's called the Gautrain, and it will be one of the most state-of-the-art rail systems on the continent. The Gautrain will link three vital points with 80 kilometres of track: Johannesburg's central business district, O.R. Tambo International Airport, and central Pretoria. Planners hope it will carry up to 100 000 passengers per day, and pull thousands of cars off the area's jammed highways. A building team of elite engineers led by Ian Thoms, Nicolas Descamps, and Jeff Groves has landed in South Africa to take on the Gautrain challenge. They face an uphill battle with an invisible and unpredictable enemy - the sinkhole prone terrain near Pretoria. But despite this and other tests of their will, they stay on course. As the rail line grows, it comes to represent the unfaltering spirit of its builders, and of this rising African nation.