A wounded captain delivers a message by bandaging it to his head. 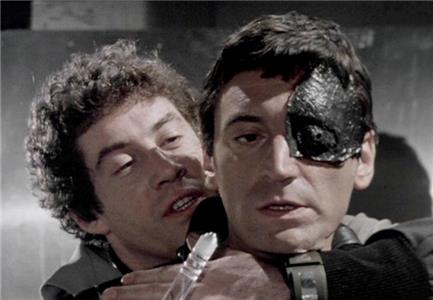 
This was the episode with the highest ratings on original UK transmission. On a season-by-season basis, season three had a 9.4 million average, with season one slightly lower on 9.2. The fourth and final season averaged 8.5 million viewers, with season two the least watched at an average of 7.1.

Ian Cullen was a late casting when the actor first booked to play Escon had to withdraw because recent side-effects of an accident.

Federation interceptors and Mutoids are mentioned for the first time.

Peter Craze, who appears as Prell in this story, would later appear in Blake's 7: Sand (1981) as "Servalan's Assistant".

This is the first of two episodes to feature Rontane and Bercol.

This episode sees the first appearances of Servalan and Travis.

Blake's arrest was seen in flashback in Blake's 7: The Way Back (1978), with no sign of Travis or the weapon Blake shot him with.

The information gained from the cypher machine is referenced in Blake's 7: Bounty (1978).

More details are given of the field medic who saved Travis in Blake's 7: Deliverance (1978).