Too Late for sorry is a short film about the life of Roxanne and Maurice. Throughout the film you learn about a surprising secret that one of the two 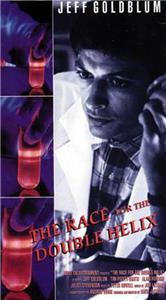 Watson and Crick race to find the structure of DNA before Linus Pauling, Maurice Wilkins, or Rosalind Franklin can find the key to unlocking the secret.


Was originally shown as a "Horizon special" on the BBC, Horizon being the name of BBC2's main science programme.

Jeff Goldblum, who portrays James D. Watson, later narrated the 5-episode documentary series "D.N.A.,"(2003), the first episode of which, "The Secret of Life," retold the same events portrayed in this film, following James D. Watson to original locations at Cambridge and King's College, and also featuring some of the original figures, such as Maurice Wilkins, Erwin Chargaff, Raymond Gosling, and Peter Pauling.

Jeff Goldblum met James Watson on a number of occasions over the years, but it wasn't until he bumped into him on a cruise (in the company of Tom Stoppard, Stevie Wonder and Paul G. Allen) that Watson declared he'd never have chosen Jeff to portray him in film.