METZARENTS is the story of Vahag, a young Armenian-American awakening to his Armenian identity. Vahag and his Korean-American girlfriend Hanna are


American Herro is the remarkable story of a young Kurdish girl who comes to America as a refugee from Iraq and lives out the American dream. 30-years


Cleansed is the story about a young American housewife of the 1950s.


Searching for the American Dream follows four young adults who are freelancers in New York City. 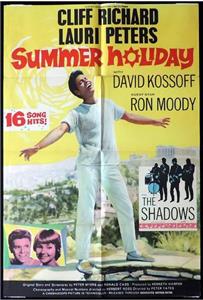 A fabulous 60s Musical - 4 London Bus mechanics strike up a deal with London Transport. They do up a double decker London Bus, drive it around Europe as a hotel and if they make it they will own and be in charge of a whole fleet. While on the road in France they pick up 3 ladies whose car breaks down and offer to take them to their next singing job in Athens. They also pick up a stowaway. A young, American boy. Meanwhile, a young American female singer has gone missing. Her mother (who is a VERY ambitious woman) and her aid take the story to the press and it makes the front page. They do all they can to make the story run for as long as possible, including misdirecting the bus up an extremely steep Yugoslavian hill. We find out the young American boy is actually the young American girl who is missing. Mayhem ensues as the lead character, Don (Cliff Richard) falls for Barbara. Eventually, when the 8 bus riders reach Athens, they're arrested for kidnapping. In front of her mother and a ...


A young Barbra Streisand was first considered for the role of the American stowaway Barbara, but was then deemed "too big" (as in too famous) for the part and would take the limelight away from Cliff Richard.

Despite popular misconception, the model of bus driven by Cliff Richard was not a Routemaster but an AEC Regent.

Cliff Richard, Melvyn Hayes and The Shadows were recalled to record the song "Bachelor Boy" as it was felt that the film was too short.

London Transport cooperated fully with the film, lending the film company three buses to act as RT1881, and more notably allowing filming to take place at the Aldenham Bus Overhaul Works during the summer shutdown. The film shows actual working equipment, including the buses being carried about by cranes and rotated on body tilter mechanisms. In one shot that would undoubtedly be prohibited, both by modern workplace safety regulations and a film's insurance underwriters, Cliff Richard himself rides 20 feet in the air on a bus's rear platform as the bus body is carried through the works by overhead crane.

Jeremy Bullock, who played the youngest mechanic Edwin, played Boba Fett in The Empire Strikes Back and Return of the Jedi

In an interview, Melvyn Hayes, who played Cyril, revealed that he and Cliff Richard had to learn to drive London double-decker buses before going off to film in Greece. The instructors only taught them for around half and hour. With such little training it would have been hard enough to drive on British roads, but they had to drive round bends on the cliffs of Greece. Hayes also revealed that he and Cliff were terrified during those sequences.

Two double-decker London buses had to be shipped to Greece because it was impossible to drive them across Europe due to low bridges and so on. But when they eventually arrived, Customs held them for two days.

Every 10 days, Melvyn Hayes had to spend five hours getting his hair dyed blonde.

Cliff Richard was barely 22 years old when he filmed this movie.

Cliff Richard was initially reluctant to do this film as he would be the main star and felt that he might not be able to carry the movie on his own. He had done a few films prior to it but they all had bigger stars along with Cliff in them.

16 songs were written for the film.

Because Summer Holiday was planned to widen Cliff's appeal to U.S. audiences, where he had only limited success, they would hire an American actress, to play his love interest. So Lauri Peters was cast on the strength of her Broadway performance in "The Sound of Music".

Upon its release, "Summer Holiday" went on to become the second most successful film at the British box office in 1963, after "The Guns Of Navarone" and a movie industry survey showed Cliff Richard to be more popular than Elvis Presley, Sean Connery and Peter Sellers.

The director, Peter Yates, went on to become a distinguished Hollywood director - the Steve McQueen classic "Bullitt" was one of his films.

Lauri Peters was so homesick she would fly back to the U.S. after filming had finished on Friday night, and jet back in on Monday morning.

The film was a big break for Jeremy Bulloch, who went on to do "Star Wars", "Dr Who", and "Robin of Sherwood". He was just 16 at the time, with a little acting experience but no dancing.

In the first four months of the film's 1963 release, the title song and three others (The Next Time, Bachelor Boy and Foot Tapper) all reached No.1 on the U.K. Charts.

The song "Bachelor Boy" had been added to the movie at the last minute as the distributors felt that the movie was too short. However the original set had already been pulled down and it would have been too expensive to fly the cast and crew to a foreign location, so the bus was brought back to the studio, another background was hastily built and the "Bachelor Boy" routine was filmed with everyone dancing around it.

Bruce Welch, one of the members of "The Shadows", revealed that the highly popular title song was composed in less than half an hour. He came up with the first line "We're all going on a summer holiday" while "The Shadows" drummer Brian Bennett came up with the line, "We're going where the sun shines brightly".

The film's premiere in Leicester Square was a huge event, attended by dozens of top show-business names.

Cliff RIchard couldn't attend the film's premiere because when he arrived in his chauffeur-driven limo, more than 3,000 fans surged forward, threatening to mob him. Cliff was trapped inside the car and the police instructed the chauffeur to drive away, with Cliff still in the back. So that night Cliff sat in his manager's flat and watched a boxing match on TV. "It was particularly frustrating because I so much wanted to be at the premiere, and I'd even turned down a South African tour for it", later revealed Cliff.

Ken Russell was originally to direct, but he didn't like the script and dropped out.

Melvyn Hayes dyed his hair blond for this film. As he had returned to his natural colour by the time "Bachelor Boy" was filmed, he wore a wig. This was the shot chosen for most of the publicity material.

Closing credits: All characters and events in this film are fictitious and any similarity to persons either living or dead is purely coincidental.