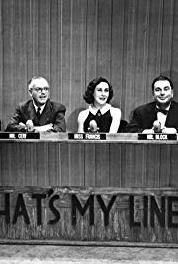 Husbands and wives panelists episode. Martin Gabel [Arlene's husband] and Richard Kollmar [Dorothy's husband] join their wives Arlene Francis and Dorothy Kilgallen to guess the lines of a woman from Pittsburgh, Pennsylvania who's the head of the woman's army corps. Only Ms.Kilgallen was able to identify the WAC Colonel. Next, a man from Michigan who's line is working as a human cannonball, Arlene eventually identified the mans line. Then, the married couples take a whack at identifying the mystery challenger Tab Hunter who enters the studio to loud cheers and applause, Arlene identified the challenger. Finally, with little time left, the panel try to guess the line of a Pennsylvania woman who packs chewing tobacco - time ran out on the panel.