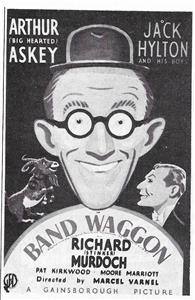 Evicted from the roof of Broadcasting House, Arthur Askey and Stinker Dickie Murdoch move into Droon Castle in Sussex. Not realising that the television equipment they discover is in use by German secret agents they do the obvious thing - put on a show. {locallinks-homepage}


Spin-off from a highly popular BBC Radio series, which ran from January 1938 to December 1939.

The film began shooting on Monday 29th August 1939 at Islington's Gainsborough Studios. Almost immediately there was a three-week or so break as the Second World War was declared on Sunday 3rd September. Shooting resumed at Lime Grove in Shepherd's Bush, west London. By this time however, many of the cast and crew had been called up for active wartime duty, requiring remounts.

Arthur Askey and Jack Hylton commuted to work together in the latter's Rolls Royce.

A novice at the disjointed art of film acting, Askey had memorized the first six pages of script for his first day on set.

As a practical joke, director Max Varnel had Askey - who had been very vocal in complaining about the flying harness sequence - hoisted up to the studio ceiling. He promptly called lunch and abandoned the comedian.