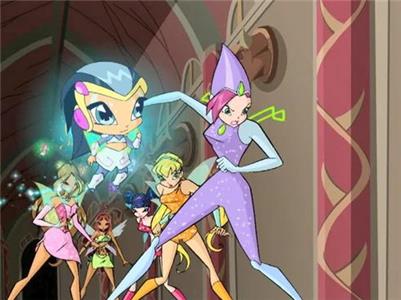 Just when a monster was about to hit them, the Winx girls got saved by Faragonda, Griffon, and Codatorta. Athena, Discorda, Ninfea, and Concorda, the Pixie Elders, are also there so they follow the Winx Club. However monsters attack them so Layla and Stella head for Realix first, then the others. Icy, Darcy and Stormy use their powers to combine and turn into MegaTrix and they take on Darkar. Bloom is about to summon the ultimate power, but Sky says words from his heart, saying that he loves Bloom. She is able to fight back the darkness, and come back to normal, leaving the power in Realix. Together, the Winx Club defeats Darkar, and the girls are so happy about their victory!