Major Syrtis goes insane as he tries to improve morale in an abandoned colony on Mars through a Christmas pageant, where the first colonist baby will 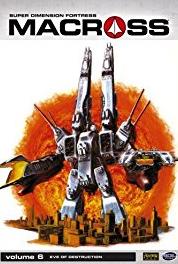 Having discovered an abandoned base on Mars, the Zentradi set up a trap for the Macross. The Macross, already far off the intended course for Earth, makes a stop on Mars for much needed supplies.


At the 5:30 mark, a message supposedly from Mars base Salla is seen on the screen. The body of the message reads: "IBSN 0 905478 509. First published in Great Britain in 2000 by Andersen Press, Ltd." Then there are a series of coordinates, followed by, "If mice could swim they would float with the tide and play with the fish down by the seaside. The cats on the shore would quickly agree..." The ISBN number is of an actual book, "If Mice Could Fly," by John Cameron. It was published by Andersen Press, Ltd, but the date of publication was 1979, not 2000.