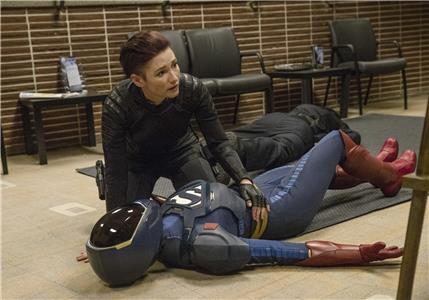 When Supergirl needs help, Alex asks Lena and Brainiac to team up. Meanwhile, J'onn questions his decision to quit the DEO. However, after running into Manchester Black, he realizes there are a lot of ways to help his fellow aliens during this tumultuous time.


The parasites that Agent Liberty uses to mind control aliens to do his bidding resemble the Ceti eels that Khan uses to control Captain Terrell and Commander Chekov as pawns in his plan of revenge against Captain Kirk in Star Trek II: The Wrath of Khan (1982).

At the fair there is a boy that won and is holding a Beebo toy. Beebo was first seen in Legends of Tomorrow season 3 episode 9, Beebo The God Of War. Beebo has become an inside joke of the arrowverse.

Ahimsa means harmlessness of thought, speech, and action, or nonviolence, in Sanskrit, and is an essential religious principle of Jainism and aspect of nonviolent resistance

David Ajala (Manchester Black) was in the DC movie The Dark Knight (2008) as a bounty hunter.

In the DC comics, Lauren Haley is Caucasian and a lieutenant in the Air Force, and an associate of Wonder Woman.

Manchester Black first appeared in 2001 as an antihero and later super villain in DC's Superman comics.

While in the protective suit, Brainiac 5 says to Supergirl "If you're in your Mind Palace, say Hi to 'Streaky' for me. In the original DC comics, Supergirl had an orange cat with white lightning bolts on its sides called Streaky! This further more referring to when he first saw Streaky in Kara's mind a season prior.

In the DC comics, Manchester Black is a leader of the Elite, a superhero team with questionable morals and methods. In his various appearances he acted as a foil to Superman and an enemy of his, or sometimes as an ally of the Justice League.