Contestants compete in a hybrid general knowledge quiz-game of chance, where incorrect answers could literally cause them to drop out of the game. 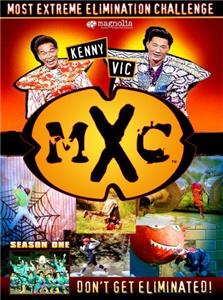 A silly Japanese game show on which contestants are painfully eliminated through barely possible stunts and events, most taking place above pools of mud. {locallinks-homepage}


Hillary Clinton once told executive producer Paul Abeyta how much she and Bill Clinton loved the show.

The name "Babaganoosh" became a running gag when the staff had little time to come up with names before tapings and ended up recycling names, with this one becoming a fan favorite.

Fûun! Takeshi Jô (1986) involves not teams, but all 100 contestants trying to get past the challenges, thus the numbers sometimes listed in Japanese on the bottom of the screen. The golden tank "Kenny" and "Vic" are sometimes seen in during final segments is part of "Takeshi's Castle"'s extremely difficult endgame, in which contestants who survive all the challenges try to defeat Takeshi and his minions in a motorized tank battle.

Often at least one contestant per show has something to do with the state of Michigan, as that's where Mary Scheer, who does all female voices, is from.

The name Captain Tenneal is a play on words. He's named after pop group The Captain and Tennille (1976), a husband and wife duo that had a few chart hits in the 1970s.

Nearly every episode introduces one of the contestants as having the last name Babaganosh (pronounced: babagenoosh). The name comes from an Indian dish called "baba ghanouj", which is made mostly from pureed eggplants.

At the end of nearly every episode, a short, humorous audio clip (usually from earlier in the show) is heard immediately following the yell of "Don't get eliminated!"

This show is entirely comprised of footage from the popular and long running Japanese game show Fûun! Takeshi Jô (1986), except the original dialog has been dubbed over in English and altered in humorous ways.