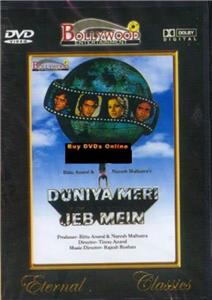 A student in a prestigious college, Vishal Khanna believes he lives a wealthy lifestyle along with his businessman brother, Karan. Vishal meets with and falls in love with Neeta, the only daughter of wealthy widower, Gulabchand. Gulabchand meets with Karan and both finalize Vishal and Neeta's marriage. Then things spiral out of control when Gulabchand is killed while Karan is run over by a lorry, and ends up losing both his legs. Vishal undertakes to look after the now crippled Karan, but has more surprises to face when Police Inspector Yadav informs him that Karan was never a businessman, but a trapeze artiste in Amar Circus, and is also a suspect of a daring robbery and the murder of Gulabchand.


Tinnu Anand was given a car as a payment for production of the film. Tinnu Anand was perturbed that Rishi used to come for the sets late at 10:30 am while Shashi used to shoot from 7 to 9 am, hence the film took 5 years in making.

Veteran Writer Inder Raj Anand, his son Veerendra Anand, ( also called Tinnu Anand ) makes his debut as director with this film. Tinnu Anand was assistant to filmaker Satyajit Ray. Tinnu Anand had married veteran actor Agha daughter and Jalal Agha's sister. Tinnu Anand's father and K.A.Abbas were good friends and even worked toghether as writers and Tinnu had acted in K.A.Abbas's Saat Hindustani which was Amitabh Bachchan's debut film and since then Tinnu and Amitabh are good friends for nearly 50 years now and they have worked toghether in Kaalia, Shahenshah, Main Azaad Hoon & Major Saab. They were also to work in Alishaan & Shanakth but dint work out.

Based on The World in My Pocket by James Hadley Chase.

Cocomotion by El Coco is used as background music in the film.