Merlin and Second Banana are thrown off a train. Merlin produces a feast from his hat; Lo, the Poor Indian sees this and covets the hat. He grabs it, 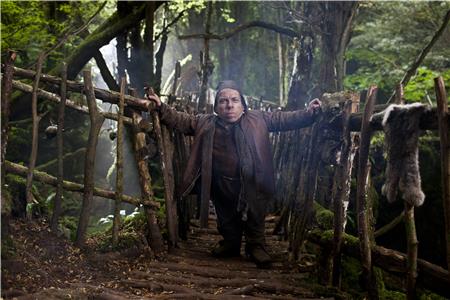 Arthur must journey alone to seek out an ancient sorcerer, the Fisher King, and retrieve a golden trident to prove his right to the throne. Morgana gives him an amulet, the Eye of the Phoenix, which will weaken and kill him if worn for too long. Discovering this, Merlin sets out after him, collecting Gwaine, and they save the debilitated prince from two attacking wyverns, discarding the amulet. Arthur believes the quest is his but Merlin, separated from the others, meets the Fisher King, who tells him he is the chosen one. He gives him a bottle of water from the lake of Avalon to use if Camelot is in peril. The quest is accomplished but Guinevere has also discovered that Morgana is a baleful sorceress and confides in Gaius.


Warwick Davis, who plays Grettir on this episode, also plays Willow on Vilou (1988).

The Fisher King makes the statement he's been waiting for a very long time, a new time to be ushered in...the time of the once and future king. In 1958, the novel "The Once and Future King" by T. H. White was published chronicling King Arthur's youth and education.