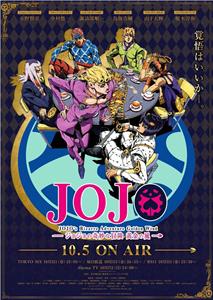 Chronicles the struggles of the cursed Joestar bloodline against the forces of evil. Beginning in 1880, Part I follows Jonathan Joestar as he matures with and eventually combats his adoptive brother, the cunning, merciless Dio Brando. Set in 1938, Part II follows the misadventures of Joseph Joestar, grandson of Jonathan, as he masters the Ripple in order to combat hostile, ancient super-beings named the Pillar Men; creators of the Stone Mask. Part III follows Jotaro Kujo and his group as they journey from Tokyo to Cairo to save his mother's life by defeating his family's resurrected archenemy, Dio. In Part IV, an Arrow manifesting latent Stand abilities travels throughout Morioh, Japan in 1999; as high-schooler Josuke Higashikata (illegitimate son of Joseph) and friends seek out the culprit of a series of decade-long homicides. Set in 2001, Part V follows Giorno Giovanna, son of Dio, and his ambition to rise within the Neapolitan mafia by subverting its most powerful gang: Passione.


Hirohiko Araki is a big fan of Western music, and many of the characters and Stands in the show are named after musicians and songs.

The first three Jojos - Jonathan Joestar, Joseph Joestar and Jotaro Kujo - are tall dark-haired muscular men. Their design is based on Kenshiro, the protagonist from Hokuto no Ken (1984).

Joseph Joestar often speaks in English in small parts, saying things like "Oh no!" And "Oh my God!". Other characters occasionally also speak English, but it's mostly Joseph

Hirohiko Araki chose Egypt as Dio's modern-era base because he had once gone there on a trip and thought the people there looked threatening and fearsome. The location is a tribute to Mitsuteru Yokoyama's story "Babel II", which was set in the desert.

The JoJo family symbol is a heart, as seen in the opening credits of the "Diamond is Unbreakable" saga. Jotaro and Josuke wear heart decorations in their clothing in "Diamond is Unbreakable", and so does Dio Brando in "Stardust Crusaders" (in keeping with him stealing from the Joestars). The heart resembles courage and nobility, as well as frailty, qualities the Joestar family displays. It also represents the source of their power; Hamon (ripples of energy) and their later-evolved Stands come from blood, and the heart is what keeps blood pumping through the body.

Dio Brando has the word "Muda" as his war cry. "Muda" is Japanese for "useless."

The "Jojo" in the title refers to each generation's protagonist having their name abbreviated to form Jo-Jo: Jonathan Joestar, Joseph Joestar, Jotaro Kujo, Josuke Higashikata, Shizuka Joestar, and Giorno Giovanna.

("Higashikata" and "Shizuka" can be rewritten as "Jo" in Japanese script, while Giorno's name homages his Italian background and his fusion of both Joestar and Brando blood).

In the "Stardust Crusaders" saga, most of the Stands are named after Tarot cards and Egyptian gods.

The series released on the 25th anniversary of the "Jojo's Bizarre Adventure" manga comic.

Many names of characters and Stands have to be altered in the English subtitles and dubs of the anime and games for copyright reasons. Some examples are: -Wham!/Wamu -ACDC/Esidisi -Cars/Kars -Steely Dan/Dan of Steel -Crazy Diamond/Shining Diamond (Pink Floyd) -Vanilla Ice/Cool Ice -Echoes/Reverb (Pink Floyd) -Killer Queen/Deadly Queen (Queen)

The major Stands seen in the saga represent an aspect of their user: