Calla Hales is the 27-year-old administrator of the busiest abortion clinic in North Carolina, and she's at the end of her rope. Hundreds of 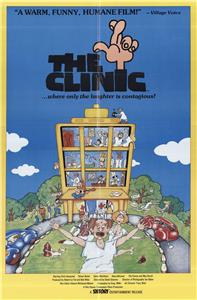 A series of humorous vignettes set in a clinic for venereal diseases. Although the film concentrates on relationships, it is also a source of instruction on safe sexual practices and STD (the script-writer worked at a clinic for three years!).

The VD clinic scenes were filmed in a large detailed set which had been built in a Melbourne studio in Victoria, Australia.

'The Age' newspaper of Melbourne, Australia stated in its 28th April 1983 edition: "Distributors and exhibitors were even more reluctant to have anything to do with the film. It acquired some respectability when an English critic praised it after he had seen a workprint at last year's Cannes Festival. This was followed by screenings at the London, Chicago and Toronto Festivals, and Village/Roadshow agreed to show it in Australia".

The movie was nominated for two AFI (Australian Film Institute) Awards in 1983, for Best Original Screenplay - Greg Millin and Best Actress in a Supporting Role - Pat Evison, but the picture failed to take home a gong in either category.

This was the only film written by Greg Millin.

This Australian feature film has never been released on DVD but was released theatrically and on home video in Australia during the 1980s.

This major Australian comedy movie about venereal disease (VD) was made and released around seven years after the partially humorous Australian documentary film The Love Epidemic (1975).

One of this film's producers, Bob Weis, once said of this movie: "A lot of people thought we should still be making prestigious costume dramas. Australians aren't very tolerant of non-naturalistic films in a local setting - they're prepared to accept them from abroad, but very suspicious about films that depart from that realist norm. Sweetie (1989) is a good example of this".

The film's director David Stevens said of this movie to Melbourne, Australia's newspaper 'The Age' on 15th April 1982: "If drama is about individuals trapped in moments of crisis, then what happens in a VD clinic is pure drama because everyone there knows that in a few moments they are going to have to reveal the most intimate personal details about themselves to a complete stranger . . . I have waited until now to direct a feature film, and it's been like a dream come true. I've been allowed to make the film I want, exactly as I want, about a contentious subject . . . We expect an outcry from the moralists of the Right, which is naturally a worry as a film is a fragile and gentle thing . . . Five minutes into the film, we state our intentions quite clearly , and anyone likely to be offended will have their worst fears confirmed. At this stage, we hope they will leave the theatre and let the rest of the audience concentrate on what the film is really about, which is love and the full spectrum of human behaviour . . . What we are trying to say is 'you're all right, you are not alone. Others have problems like yours, so there is no need to feel like slashing your wrists just because you have a dose of syphilis'."

Director David Stevens described this picture as "a comedy of manners".

The principal photography period on this picture ran for around five weeks.

Some movie posters for the film featured a blurb that read: "The ins and outs, The ups and downs, The comings and goings at . . . THE CLINIC. A HIGHLY INFECTIOUS COMEDY".

The film was made almost entirely without any music score for the entire picture except for about two interludes and a song that plays over the closing credits.

Across release territories, promotional title logos for the movie's "The Clinic" name formed a cartoon hand with two crossed fingers (signifying luck in diagnostic results) out of the second letter "i" in the film's animated "The Clinic" title logo.

The movie features a "series of cameos by performers from Australian fringe theatre" according to The Film Year Book Volume Two (1983). Director David Stevens, in an interview with 'The Age' newspaper, in an article published on 15th April 1982, said that there were more than sixty actors who worked on the movie "many of them comedians working on the fringe theatre and cabaret circuit".

The book Australian Film 1978-1994 edited by Scott Murray states "no character names are given in the opening or closing credits". For the purposes of that book, these were "taken from [the] Monthly Film Bulletin". Moreover, the Oz Movies website states "the film is also distinguished by having perhaps one of the longest tail set of identifying credits for actors of any film in the Australian revival - but at the same time, the credits fail to provide the names for the characters in the usual way. Murray's Australian Film solved this by taking a list of names from the Monthly Film Bulletin, and this site takes its names from the same source, while also checking them against the film". According to the Oz Movies website, "there are over 40 cast who get an identifying credit".

Director David Stevens in an interview with Debi Enker for the Australian magazine 'Cinema Papers' published in April 1984 promoting his next film Undercover (1984), Stevens said of The Clinic (1982): "One of the reasons I made The Clinic (1982) was that I didn't want to go on making A Town Like Alice (1981) again and again. I wanted to do something that would be perceived as totally different, though I happen to think that The Clinic (1982) has the same soft, humanist love in it as A Town Like Alice (1981) . . . When we came to make The Clinic (1982), I decided that it would be a very static film, with reasonably long takes. It wasn't a decision I had to sit down and think about. I believed that the characterizations were paramount to the film; any attempt to throw the camera all over the set would have distracted from the simple purity of the script and the characterizations, which is what the film is all about . . . Lots of people said to me when they read the script of The Clinic (1982), 'Ah yes, it's all very well you know, but you should make it a story just about one of the doctors'. To which I said, 'Yeah, well that's fine, maybe it would make a very good film, but it is not the film I wanted to make. I wanted to make the film it became: a day in the life of a VD clinic, not a day in the life of Dr Eric".