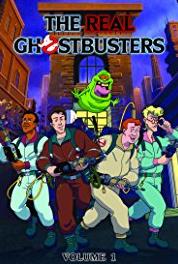 The Ghostbusters discover a real goblin.


Ray threatens Peter with Kryptonite, which was Superman's weakness.

When Peter is used as the bait, the other Ghostbusters mention various entities the Shape Changer could mimic, including Demon, Banshee, Ghoul, Dybbuk, Phantasm, Troll among others. Many of these have already been encountered by the Ghostbusters in previous episodes while some they would face in future episodes.

Janine and Slimer don't appear in this episode.