The sons of Medea are an Italian "teledramma", broadcast live on 9 June 1959 on the National Program. It became a sensational media event because 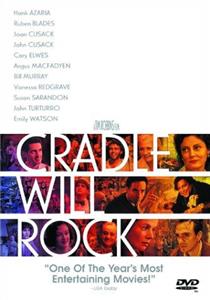 A true story of politics and art in the 1930s U.S., focusing on a leftist musical drama and attempts to stop its production.

In 1930s New York Orson Welles tries to stage a musical on a steel strike under the Federal Theater Program despite pressure from an establishment fearful of industrial unrest and red activity. Meanwhile Nelson Rockefeller gets the foyer of his company headquarters decorated and an Italian countess sells paintings for Mussolini.


This film is based on actual events, though it takes liberties with the details. Marc Blitzstein's 1937 anti-capitalist operetta 'The Cradle Will Rock', about the effort to unionize steelworkers, was originally produced as part of the Federal Theatre Project. The Federal Theatre Project (1935-1939), in turn, was part of the Works Progress Administration (WPA), which was created in 1935 by President Franklin D. Roosevelt to employ people during the Great Depression. Directed by Orson Welles and produced by John Houseman, Cradle was shut down right before it was due to open because of "budget cuts" at the FTP. Everyone involved believed the government deliberately cut funding because the play's message offended its more conservative contingent; Actor's Equity prohibited its members from taking part, apparently oblivious to the fact that Cradle was a pro-union piece and Actor's Equity was - and is - a union. Welles, Housman and Blitzstein spontaneously rented another theater and planned to put on Cradle with Blitzstein himself singing/reading the piece; the show sold out and various actors defied Equity and performed their parts from the seats they'd bought. The secondary plot which involved Mexican painter Diego Rivera butting heads with Nelson Rockefeller when the mural the latter commissioned for a Rockefeller Center lobby on the high-minded subject of "human intelligence in control of the forces of nature" included a portrait of Lenin, is also based on fact, though it happened in 1933. The incident is also dramatized in the 2002 film Frida (2002). Tim Robbins included it because it tied into the theme of artistic integrity vs. economic practicality.

The planned 1984 version of this story, which had to be abandoned for financial reasons, would have been directed and written by Orson Welles himself. Rupert Everett would have played the young Welles, and Amy Irving his first wife, Virginia Nicholson. Welles's unmade screenplay was published after his death. Tim Robbins has always insisted that he has never read it.

Bertolt Brecht appears as a spirit-like figure. Technically, Brecht was still alive in 1936, the year the film is set in.

The part of the movie in which Congressman Joe Starnes asks Federal Theatre Project director Hallie Flanagan if Christopher Marlowe is a Communist and Flanagan responds that he was not--that he was "the greatest dramatist in the period immediately preceding Shakespeare," is repeated verbatim from the transcript of Flanagan's testimony in front of the house Un-American Activities Committee (HUAC) in December 1938.

Despite the fact that his then wife would have the female lead, Steven Spielberg was unwilling to provide financing to Orson Welles for this project. Spielberg also paid $55,000 for the " Rosebud " sled around this time.

When Orson Welles was going to direct in 1984, John Landis was to be his producer.

The three-toned art-deco console radio seen in an office sequence is a Midwest Radio Model B-16 from 1936.

Despite the fact that this was filmed in Super 35, "Filmed in Panavision" is listed in the end credits.

After Diego Rivera's "Man at the Crossroads" mural was destroyed in 1933 at the Rockefeller Center, the artist recreated it in 1934. Using black and white photos of his New York mural, Rivera painted a smaller mural in Mexico City's Palace of Fine Arts. He made some changes in this painting. He added more of the early leaders of communism - Leon Trotsky, Friedrich Engels and Karl Marx. He called his new mural, "Man, Controller of the Universe."

Marc Blitzstein was a composer who wrote and adapted musical plays on and off Broadway. In 1958, he appeared before the House Un-American Activities Committee. He said that he had been a member of the Communist Party but quit it in 1949. Nearly two-thirds of the American communists fled the party after Joseph Stalin's atrocities became known.

Marc Blitzstein married novelist Eva Goldbeck in 1933. They were very close and after she died of anorexia in 1936, Blitzstein was grief-stricken. That supposedly led to his frantic effort to create "The Cradle Will Rock."

"Mark the Music" is the title of a 1989 biography of Marc Blitzstein by Eric A. Gordon (St. Martin's Press, New York). Gordon says that the talented musician and composer was openly gay. After World War II, in which he served, Blitzstein lived for a time with a bisexual Army buddy. He was married for a short time to author Eva Goldbeck (1901-1936). In 1964, Blitzstein was murdered by three sailors he picked up in a bar in Martinique. He was 58 years old.

The New York Times on Jan. 24, 1964, ran a large article that said Marc Blitzstein, author of "The Cradle Will Rock," had been killed in a car accident in Martinique. On July 16, 1989, the same paper ran an article by Don Shewey that reviewed Eric Gordon's biography of Blitzstein ("Mark the Music," 1989, St. Martin's Press, NY). In that article, The New York Times said that Blitzstein was murdered in 1964 "by three sailors he picked up in a bar in Martinique."

The controversy over the Rockefeller Center mural came to a head on April 24, 1933. The New York World-Telegram that day ran an article that attacked Diego Rivera's painting. The newspaper said it was anti-capitalist propaganda. After that, Rivera added the portrait of Lenin to the mural. Upset by the bad publicity, Rockefeller in May asked Rivera to remove the picture of Lenin. Rivera refused, and Rockefeller paid him in full and fired him from completing the job. Workers then chiseled the nearly completed mural off the wall.

Cary Elwes and Angus Macfadyen would later act in the "Saw" series, as Doctor Gordon in "Saw" and Jeff Reinhart in Saws "3" and "4" respectively.