A motorcycle rider whose registration has been cancelled sparks a chase. A young drunk driver gets the police's attention by running a red arrow, 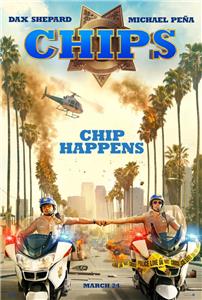 A rookie officer is teamed with a hardened pro at the California Highway Patrol, though the newbie soon learns his partner is really an undercover Fed investigating a heist that may involve some crooked cops.

An FBI agent goes undercover in the California Highway Patrol as officer Frank "Ponch" Poncherello. Members of the CHP have been robbing cash delivery vehicles and his job is to uncover the perpetrators. At the CHP he is partnered with a 30-something rookie, Jon Baker. Baker is a former professional motorcycle rider with a list of ailments and personal problems who is lucky to be in the CHP. They are very different people and immediately clash.


Dax Shepard did most of his own stunts, including the stoppie during the training test.

After the trailer debuted, a rumor stated that Erik Estrada, star of the original CHiPs (1977), blasted the trailer as "pure trash". Estrada later tweeted he never said that, and said, "Just watched the CHIPS trailer and laughed. Dax Shepard and Michael Peña are great. Cool stunts too."

Dax Shepard originally envisioned the film to be a big budget take with a PG-13 rating. Due to budget cuts after signing on, he chose to make the film with an R-rating.

In real life, Dax Shepard and Kristen Bell are married with kids.

Parts of the theme music from the original television show CHiPs are used throughout as background music.

Theme music from the TV show S.W.A.T. plays when the S.W.A.T. vehicle makes an appearance.

Dax Shepherd, Kristen Bell and Ryan Hansen all worked together previously on the movie 'Hit & Run' where Dax and Kristen play a couple again.

Screenwriter and star Dax Shepard, specifically wrote the role of his wife Karen, for his real life wife and mother of his two daughters Kristen Bell.

Dax Shepard and Maya Rudolph also appeared together in Idiocracy (2006).

The line from Back to The Future ("Roads. Where we're going we don't need roads.") is paid homage to when Punch drives out of the barn. A trail of flames from the car tyres can also be seen coming out the barn.

Ed Begley Jr. And Kristen Bell have previously appeared together in season 3 of Veronica Mars

Jason Ellis: one of the stunt men Dax Shepard punches. In a later segment on Ellis' radio show, Ellis told Shepard that he would've been very upset if he'd waited around for hours, only to have Shepard pull his punches.

Erik Estrada: The actor who played Ponch in the TV show appears here as the paramedic who treats Ponch and Jon in the final scene.

On the second day of filming, Dax Shepard performed his nude scene, when Ponch throws him in the bathtub (his genitalia was censored).