Music documentary featuring an array musical styles, including blues, gospel and jazz. Includes original performance footage of a number of


Set in Dublin, Apollo Music Club tells a story of an eclectic group of musicians who meet on a part-time music course. Over a year, the story not

The Circus According to Cecil (2014) watch online


Follows ringmaster and clown Cecil MacKinnon as she directs A Child's Christmas in Wales. Through the eyes of one talented and opinionated artist,

Magic on Music Mountain: The Story of the Lambertville Music Circus (2014) Online 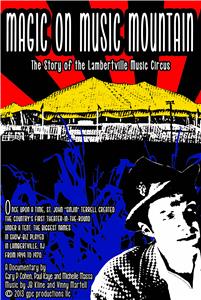 Magic on Music Mountain: The Story of the Lambertville Music Circus (2014) Online

From 1949 until 1970, St. John Terrell's Music Circus in Lambertville, NJ presented B'way musical comedies and the top jazz, folk and rock-n-roll artists of the time period. "Sinjin", as Mr. Terrell called himself, was the first to create a theater-in-the-round housed under a huge circus tent. The first decade or so was devoted to B'way musicals, and many stars began their careers at the Music Circus, including Bernadette Peters, Dom DeLuise, Shirley MacLaine and Robert Goulet. Once the tent moved to a larger location about a mile away, artists such as Louis Armstrong, Count Basie, The Four Seasons, the Supremes, The Lovin' Spoonful and Liberace gradually replaced the legit shows. This documentary tells the story of the venue through interviews with people from both sides of the curtain, including set designers, musical directors, stage managers and performers such as Olympic skater Dick Button and Vince Martell from "The Vanilla Fudge".


The painted horse on the old Barnum Restaurant site, which is now is Oxford Communications,identified as being from the original Music Mountain carousel was actually done by an more recent artist and painted as a tribute to Music Mountain.

The DVD version has three extras - the complete version of Vinny Martell singing "Baby, I'm Blue", and interview with Florence Moonan discussing her Music Circus-related artwork, and a tour of the original site by resident Judy Wycoff.

Official Selection in the Documentary Short Category at the 2014 Garden State Film Festival in Atlantic City.