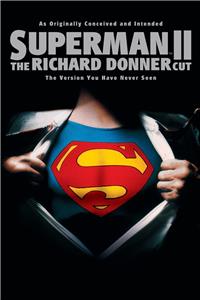 Before Krypton exploded and Jor-El put his baby son, Kal-El, in a rocket ship to Earth, the benevolent ruler was forced to banish three irredeemable criminals to another dimension called The Phantom Zone. The trio's leader, General Zod, vowed revenge. Later, of course, Kal-El grew up to become Superman, Earth's mighty champion. A battle with the criminal mastermind, Lex Luthor, ends with Superman hurling a nuclear warhead into space where it explodes, but not harmlessly. Instead, it frees the Kryptonian threesome from their other-dimensional prison. They soon discover they have almost unlimited power (the same powers, in fact, as Superman), which they use to take over the Earth. Meanwhile, the intrepid reporter, Lois Lane, learns that her bumbling colleague, Clark Kent, is really Superman, a revelation that leads to him bringing her to his frozen Fortress of Solitude and renouncing his powers in order to make love to her. It is only when Superman and Lois return to civilization that ...


Richard Donner had been approached about a possible Director's Cut of this film as early as 2001, however complex legal issues involving the cut footage, as well as reluctance on the part of Donner prevented any official restoration from taking place. All this changed with the production of Возвращение Супермена (2006), which lead to Warner Brothers resolving all outstanding legal disputes regarding footage from the first two Superman films. By that time, public demand lead Warner Brothers to commission a "Donner Cut" edited by Michael Thau, based on the original shooting script, without Donner's participation. After repeated urging by Thau, Donner eventually agreed to approve of scenes as Thau progressed in editing. Over time, the more Donner allowed himself to participate in the project, the more interest he took in restoring his original concept for the film, even going so far as to bring Screenwriter Tom Mankiewicz to the fold to insure story cohesion. The result is the closest film possible to Donner's and Mankiewicz's original vision for the film.

The actor playing Clark Kent yelling out to Lois Lane after she jumps out of the Daily Planet, is not Christopher Reeve. An uncredited actor was brought in to film the shot for the DVD release.

One major sequence that had to be omitted from the film was the "villains conquer the world" sequence, which depicted Zod, Ursa, and Non destroying national monuments and landmarks across the globe. As the original sequence was never shot, Michael Thau had considered using computer effects to augment existing footage to simulate the scenes, until Richard Donner vetoed the idea, not wanting the new computer effects to clash with those of the original film.

This movie is Richard Donner's Director's Cut of Супермен 2 (1980). Donner was the original director, but was replaced by Richard Lester.

In shooting an emotional scene near the end of the film where Lois sheds tears while having a conversation with Superman on the roof of her apartment, Margot Kidder refused to have anything help her to cry, and sure enough, she was able to do it on her own.

The actress playing Lois Lane using the typewriter during the end scene is not Margot Kidder. The ending that was written, but never filmed, had Lois Lane die at the Fortress of Solitude, which in turn caused Superman to reverse time. The typewriter scene was shot in 2006, specifically for the restoration, and had an uncredited actress stand in for Lois.

In one of the beginning scenes of the Lester version of this movie, Clark Kent walks out in front of an oncoming taxi cab, denting the front of the cab. This scene was never used in the Donner Cut, but during the Metropolis battle, this taxi is seen, with the same cab driver in it.

The ending scene, in which Superman reverses time, was the original intended ending for this movie. But during production of Superman (1978), it was decided to use the ending for the first film instead. Richard Donner and Tom Mankiewicz planned to eventually create a new ending, but Donner was fired during production. When restoring this version, Donner was going to use the theatrical version's ending, so that it would not have the same ending as the first film. But Mankiewicz never liked the changed ending, in which Clark kissed Lois, so the original intended ending was used.

Most of the new scenes in this cut were shot during the production of Superman (1978). They had to be re-written and re-shot by Richard Lester because, under Director's Guild rules, he had to direct more than half the film to be credited. One exception to this, is the new alternate scene where Lois discovers Clark's true identity by shooting him. Richard Donner was never able to shoot this scene during principal photography. The take now used in this cut, was used as a screentest for Christopher Reeve and Margot Kidder.

Though she holds a cigarette briefly in one scene, Lois Lane is never shown smoking in the Donner cut of the film.

This is the only Superman movie where the line "Up, up, and away" is said by one of the characters.

After the President kneels to Zod, the scene switches to a car (presumably with Clark and Lois in it) as they drive through the snow and then up to the diner. The trumpet music playing is a jazzed up version of the track "The Planet Krypton" from John Williams' score from Superman (1978), a theme that you hear many times throughout the franchise.