A business man from a silver prospecting company pays a visit to a cowboy's property that can talk the environment with his mind. 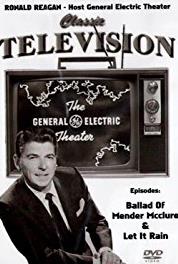 Wandering cowboy Britt Ponset finds himself caught in the middle of a dispute between mine owner "Silver Annie" Huxley, the leaders of Virtue City, and the railroad, which wants to builds tracks across her property.


This story was based on the "Silver Annie" episode of Stewart's 1953- 54 NBC radio series, "The Six Shooter." This was one of three Frank Burt radio scripts purchased by Stewart from that radio series.

The theme music played during the episode is Basil Adlam's "Highland Lament", from Stewart's "The Six Shooter" radio series.

This episode reunites Stewart with Beulah Bondi, his frequent co- star from films such as It's a Wonderful Life and Mr. Smith Goes to Washington.

This is the only time Stewart actually played Britt Ponset, the character from his "Six Shooter" radio series, on film by name.