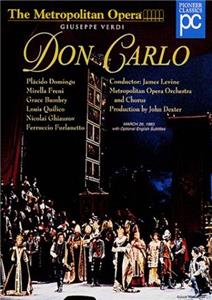 Don Carlo, crown prince of Spain, falls in love with Elisabeth of Valois, originally promised to him but later married to his father King Philip, as part of the terms of a peace treaty between France and Spain. Incited to treason against his father on behalf of the Flemish, and accused of adultery with the queen, Don Carlo is cast into prison. Escaping, he flees to the monastery of St. Just, where Elisabeth comes to bid him farewell. The lovers are surprised by the King and the Grand Inquisitor, but Don Carlo is protected from them when the ghostly Charles V emerges from the tomb and draws him into the cloister.