Its the year 2045. War on drugs in Mexico has escalated as a ruthless drug Cartel use robots to enforce their operations.


In modern day Mexico, a cameraman is forced to film horrific brutality for a powerful drug cartel, but when he has finally seen enough bloodshed he 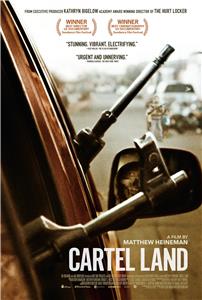 Filmmaker Matthew Heineman examines the state of the ongoing drug problem along the U.S.-Mexican border.

A physician in Michoacán, Mexico leads a citizen uprising against the drug cartel that has wreaked havoc on the region for years. Across the U.S. border, a veteran heads a paramilitary group working to prevent Mexico's drug wars from entering U.S. territory.


The Autodefensas group shown in the film was created by civilians to stand up against the cartels because the government is overrun with corruption. Individuals speak about how little the Mexican president (Enrique Peña Nieto) is doing. In the film, the Autodefensas is shown celebrating its one year anniversary on February 24, 2014. On that exact same day, TIME Magazine ran an issue with the Mexican President Enrique Peña Nieto with the headline "Saving Mexico." Nieto reportedly paid TIME $44,000 for this cover article coincidentally released on the same day as the Autodefensas anniversary.

Winner of the George Polk Award for documentary film in 2016. The prize is meant to honor reporters who advanced vital national conversations with their masterful investigative reporting.