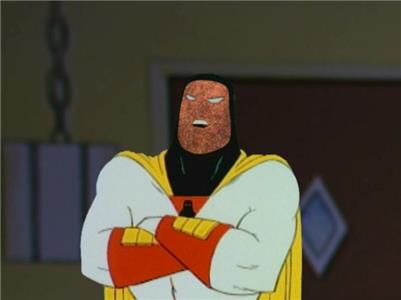 Zorak is supposedly murdered while the lights are out. Space Ghost interviews Busta Rhymes as a suspect. Zorak stands up, revealing he was merely pretending to be dead and refuses to do so anymore because he thinks the script sucks. Space Ghost hits Zorak with a wrench, knocking him out for real. There's a gas leak in the studio, causing everyone to get high. Zorak regains consciousness again and Space Ghost decides to take him to the hospital. However, they accidentally go to a rave instead. On the way back from the rave, Space Ghost crashes the Phantom Cruiser and Moltar is injured. Instead of going to the hospital, Space Ghost brings Zorak and Moltar to the grocery store. Later, back at the studio, Zorak has crawled into the heating duct and refuses to come out. {locallinks-homepage}