In the span of one year, the Diodes opened Toronto's first punk club, released Canada's first punk album on a major label and helped instigate an 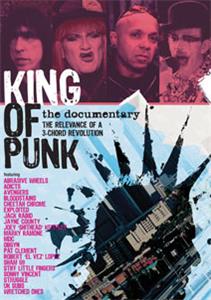 The 'King of Punk' documentary includes interviews with members of legendary Punk bands like the Ramones, Adicts, Exploited, Avengers, Dead Boys, UK Subs, Zeros, Wayne County & the Electric Chairs and many other artists who were involved in the Punk scene between 1976 and 1982. It also profiles OBGYN, an all-girl punk band based in Fayetteville, N.C., and Patrick Clement, owner of FNS Records. The film's title, which is based on one of OBGYN's song titles, doesn't refer to any one person. That's the whole idea of punk, is that there's no idolizing. Anybody can do it. . . everybody is the King of Punk.