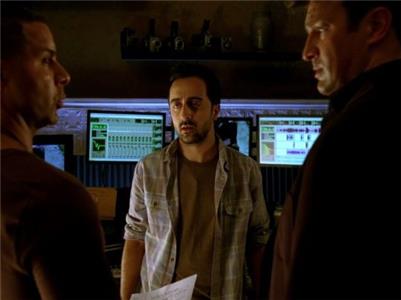 A rock band finally reaches fame, but one of its members, James Swan is found murdered in his trailer. Due to the inevitably high media profile, the city orders full cooperation with a TV crew which was already filming the band in reality-style. That makes Javier show off, Kate camera shy, while Castle pulls the strings, almost like a director. The team finds conflicts within the band. Roadie Hank Rodgers also proves a link to John Campbell, from whose abusive cult Swan escaped and whom he recently met and paid a small fortune in cash.


In the background of the video and pictures of the victim's Q&A about the band, you can see Molly Quinn (Alexis Castle), right in front of the father of "Ms. Butterfly".

Castle identifies the murder weapon as a 1959 Gibson Les Paul "flame-top" electric guitar. This model is one of the most highly prized and collectible guitars in the world.

Pete Best was the drummer for the Beatles who was replaced by Ringo Starr. Stu Sutcliffe was the original bassist for the same group, replaced by Paul McCartney, who had been the rhythm guitarist.

When Castle tells the cameraman to "fade to black" and "add a hard sting" he hums a few notes. Those notes are the opening score shown with the Castle title card at the beginning of each episode.

When Castle says to the team that "pure speculation would be Swan purchasing thermonuclear technology to have a scientist make him an amplifier that went all the way to 12". It's a reference to the movie/mockumentary Spinal Tap, in which band guitarist Nigel Tufnel has a guitar amplifier that goes to 11 instead of the normal of 10. With the argument that they are "one louder".

Title reference: "Swan song" is an idiomatic final performance before an artist's retirement or death. As the episode deals with an up and coming rock band, it could also loosely refer to Swan Song Records, the recording label created by Led Zeppelin in 1974.

Stana Katic plays record producer Genya Ravan, who was also the lead vocalist for rock bands including Goldie & the Gingerbreads and Ten Wheel Drive, in CBGB (2013).