Lucy, an independent, young lesbian, hasn't spoken with her grandmother in years. Prejudice and a closed mind, on the part of the older woman, have


Ming and his wife Jen lead quiet ordinary lives with their 13 years old daughter Lucy, while their 20 years old son Sunny is at medical school 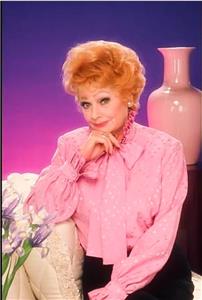 Lucy Barker is a grandmother living with her daughter's family while constantly getting into comedic predicaments.


Producer Aaron Spelling blamed himself for the failure of the show, stating that he should have never granted Lucille Ball creative control. Spelling knew something was wrong when the studio audience in attendance during the pilot gasped when Ball was doing a physical stunt, fearing she would get hurt. Spelling would never produce another sitcom again, saying "If you're gonna fail with Lucille Ball, you should not do comedy."

Gale Gordon was lured out of retirement by Ball to be her co-star again. Gordon joined the show on the condition that he be paid for an entire season even if the show was canceled quickly.

The pilot made Nielsen's Top 20 for the week. Ratings for subsequent episodes dropped steadily, ultimately turning the show into one of the biggest flops in television history. Reportedly, its failure hurt Lucille Ball so deeply that she never completely recovered, convinced that the public no longer wanted her.

The show was inspired by the success of Die Bill Cosby Show (1984) and Golden Girls (1985) the previous season. Producers felt that Ball, a past TV star like Cosby, could revive her career with a family sitcom.

The exterior of the hardware store featured in the show was actually a vacant storefront located directly across the street from the studios.

13 episodes were filmed, but only 8 aired. A 14th episode was written but was not produced.

Audrey Meadows was asked to join the cast after her successful guest appearance. But she turned the offer down.

As with most of Lucille Ball's series, rights to this show are now owned by CBS, which bought the rights to "I Love Lucy" (including its hour-long specials) in 1960. Paramount Television, which gained ownership of follow-up "The Lucy Show" in 1967, gained syndication rights to the former show in 1995 following longtime distributor Viacom's acquisition of Paramount Pictures. Paramount/Viacom gained rights to "Life with Lucy" in 1999 following its acquisition of the show's production company Spelling Entertainment. Following CBS' 2000 merger with, then 2006 spin-off of Viacom, CBS now has ownership of the original Paramount Television library, including full rights to the "Lucy" shows (except "Here's Lucy").

On the mantle, there are photos of Lucille Ball as a baby.

The creators of this show Madelyn Pugh-Davis and Bob Carroll Junior, had also played roles in creating Ball's iconic sitcom classic "I Love Lucy," as well as being part of the creative team who concocted nearly every major television series in which Lucy appeared over several decades.