Documentary short reveals the history and importance of "The Forward", the only daily newspaper still published in Yiddish in the US. Directed by


A film about the author's reflection on one of the darkest periods in human history of the former Yugoslavia; a period of death, pain and fear.


As the war in Europe raged on around them, the community in young Sig's farming village spoke of giant machines destroying entire cities just beyond


A documentary about the history and the importance of the prisoner of war camp built in Monticello, Arkansas during World War 2 to host Italian POWs. 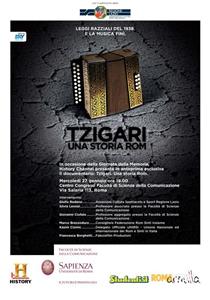 The Roma and Sinti cultures have no written history. Little is known of the roughly half a million gypsies who were killed in Europe between 1940-1945, nor of the thousands of Italian Roma and Sinti nomads who were interned in the 80 concentration camps established by the Fascist regime. A time of suffering that some nomads do not want humanity to forget, leading them to tell the story of their holocaust to the "gaje" or non-gypsies. Tzigari, an authentic spokesperson of the Romany people has come forward with his personal testimony. Built around his story, the documentary film reveals an undisclosed and exclusive scenario of WW2, shedding new light on some of the darkest pages that have been removed from the annals of human history.