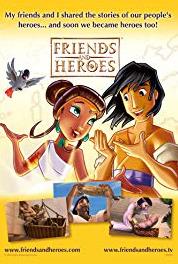 Portia finds a dispirited Macky and gives him what she thinks is good news: that the authorities will release Antonius if he names the people he helped. But Macky knows that Antonius would rather die than do this, and he tells Portia how Jesus was condemned to die. Worried, Portia begs her uncle Tiberius to intervene on behalf of Antonius. A hesitant Tiberius agrees to send a message to the Emperor. Meanwhile, Antonius is on trial, and it's not going well. Marcus is pushing for execution, while Antonius is remaining silent. Finally, a messenger arrives with news from the Emperor: he has decided not to intervene with the trial. Antonius is quickly condemned. As he sits in his cell the night before his planned execution, Antonius tells a seemingly uninterested guard the story of the crucifixion. But the guard turns out to be Absolom, who's been brought in by Macky to help rescue Antonius. Antonius regains his freedom, but not before a daring chase through the catacombs, topped by a ...