Nathalie is six years old and lives alone with her father, in that her mother is in a clinic. She also has a brother and a sister. They are 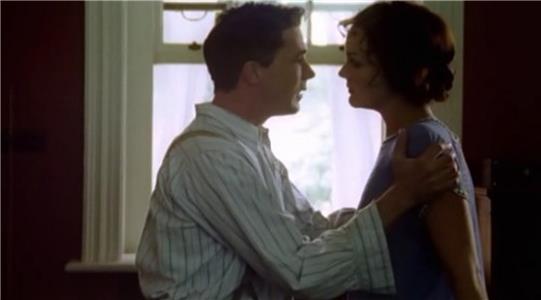 Fourteen years after her mother, Caroline Crale, was hanged for the murder of her artist father Amyas Crale, Lucy Crale asks Hercule Poirot to investigate her father's death. She is convinced that her mother was innocent but is prepared to accept the truth, whatever that may be. Poirot visits in turn all five persons present when the murder took place including Amyas' best friend, Philip Blake, who was visiting the Crales when Amyas was killed; Philip's brother Meredith from whom Caroline supposedly stole the poison used to kill her husband; Elsa Greer, who was sitting for a portrait and with whom Amyas was supposedly in love; Caroline's half sister Angela who despised Amyas but believed her sister to be innocent; and Miss Williams, the governess. Having heard the tale from five different perspectives, Poirot reunites them all to identify the murderer.

Meredith Blake is also the name given to a character in Nie wierzcie bliźniaczkom (1998).

Julie Cox (Elsa Greer) and Toby Stephens (Philip Blake) appeared together in Inspector Lewis's "A Generation of Vipers" as Miranda Thornton and David Connelly. Julie Cox is almost unrecognizable between the two shows because in Inspector Lewis, she is a plain, mousy Oxford don who doesn't wear one speck of makeup. In Poirot, she is made up very glamorously, and it's hard to tell it's the same woman.