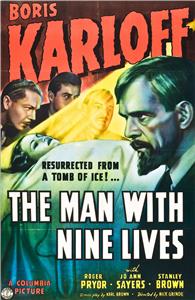 Dr. Leon Kravaal develops a potential cure for cancer, which involves freezing the patient. But an experiment goes awry when authorities believe Kravaal has killed a patient. Kravaal freezes the officials, along with himself. Years later, they are discovered and revived in hopes that Kravaal can indeed complete his cure. But human greed and weakness compound to disrupt the project. {locallinks-homepage}


Part of the Son of Shock package of 20 titles released to television in 1958, which followed the original Shock Theater release of 52 features one year earlier. This was also one of the 11 Columbia titles, the other 61 all being Universals.