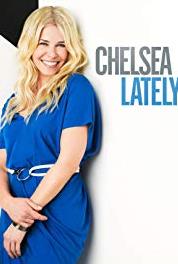 In her opening monologue, host Chelsea Handler talks about her dog Chunk and why he would be able to compete in a professional dog show despite never having performed in one. Chelsea and her round table panelists Ali Wong, Heather McDonald and Fortune Feimster discuss a two year old girl and her parents who were kicked off of a Jet Blue flight to the Caribbean because she wouldn't sit in her seat during take-off, a fifty-four year old British man accused of masturbating in front of a woman on a train, a Pennsylvania man who robbed a woman as she was stepping off a bus then later called her and asked her out for a date, CUNY instituting a zero tolerance policy on professors having sex with students, and a Chicago gay bar banning women after 11pm. And Chelsea chats with guest Stanley Tucci about his new movie Голодные игры (2012), how he chooses acting projects, and how he gets out of the jam when forgetting lines ...