A comedy special starring Robbie Coltrane as a variety of different characters. 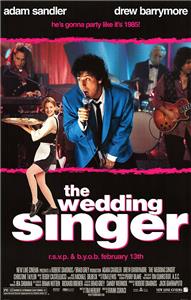 Robbie, a singer, and Julia, a waitress, are both engaged, but to the wrong people. Fortune intervenes to help them discover each other.

Robbie Hart is singing the hits of the 1980s at weddings and other celebrations. He also can keep the party going in good spirit, he knows what to say and when to say it. Julia is a waitress at the events where Robbie performs. When both of them find someone to marry and prepare for their weddings, it becomes clear that they've chosen wrong partners.


The butterfly jean jacket that Julia wears throughout the movie belongs to Drew Barrymore. Director Frank Coraci liked her jacket and told her to wear it as part of her costume.

Robbie tells Linda at one point to "Get out of my Van Halen t-shirt before you jinx the band and they break up". David Lee Roth left Van Halen in 1985 (the year in which the movie is set).

A musical adaptation of this movie opened at the Al Hirschfeld Theatre on April 27, 2006, and ran for two hundred eighty-five performances. It was nominated for the 2006 Tony Awards for the Best Musical, Actor (Stephen Lynch), Book, and Score.

The song played during Robbie and Julia's first kiss (the "church tongue" kiss) is the song he sings to her at the end, "I Wanna Grow Old with You".

The song playing at Robbie's aborted wedding to Linda is a string quartet arrangement of Journey's "Don't Stop Believin'".

Kevin Nealon's second cameo in an Adam Sandler film. The first was as a golfer in Happy Gilmore (1996); this time he's a bank manager.

The line "Mr. and Mrs. Harold Veltri" pays tribute to Gino Veltri, the lead singer of the band that played at the third grade graduation in Billy Madison (1995).

The character of George was based on Boy George, lead singer of Culture Club. He sings "Do You Really Want to Hurt Me" in the film.

Faye, the photographer, says that Robbie and Julia will last like "Donald and Ivana, Burt and Loni, and Woody and Mia." She's referring to Donald and Ivana Trump, Burt Reynolds and Loni Anderson, and Woody Allen and Mia Farrow. The first two couples had bitter divorces. Allen and Farrow, who never married, endured a bitter break-up.

Coincidentally, this movie has several actors and actresses who have appeared on Friends (1994). Christine Taylor (Holly) appeared as Phoebe's friend and Ross' potential girlfriend Bonnie - the one who shaves her head. Christina Pickles (Julia's mother) plays Monica and Ross' mother. Incidentally, she mentions in the car to Julia -before Robbie is to marry Linda - that Julia's paternal grandmother has facial hair and looks like Magnum P.I. (Tom Selleck), who also plays Richard, Monica's boyfriend. Jon Lovitz (Jimmy Moore) appeared on Friends (1994) twice. He played the pot smoking restaurant owner who offers a potential job to Monica in the first season, and later reprised that role when Phoebe sets him up on a date with Rachel. Angela Featherstone (Robbie's fianceé) plays the hot girl who works at the copy shop, and with whom Ross "cheats" on Rachel when they were "on a break". Alexis Arquette (George) played a waitress at the club, "Viva Las Gaygas", at which Chandler's dad was the headline act.

George (Alexis Arquette) makes a special appearance at the end of Blended (2014), the third movie with Adam Sandler and Drew Barrymore.

Robbie only sings at two weddings in the movie, singing three songs total. The song he sang at first wedding in the opening scene was "You Spin Me Round (Like a Record)" by Dead or Alive. At the second wedding he sings "Holiday" by Madonna and "Love Stinks" by The J. Geils Band after he was stood up by Linda at his own wedding.

The guitar that Robbie (Adam Sandler) is playing during "Somebody Kill Me Please" is a Gibson ES-335 Semi-hollow body in Heritage Cherry. The amp is a Fender Twin Reverb.

The car Glenn (Matthew Glave) drives is a DeLorean, the same model car Doc Brown used as his time machine in Back to the Future (1985).

The scene of Robbie interviewing at a bank is based on a 1988 Saturday Night Live (1975) "First Citiwide Change Bank" sketch, which also included Kevin Nealon.

The role of Glenn Guglia was originally written with Jim Carrey in mind. However, he declined. If Carrey had accepted the role, this would be the only time he and Adam Sandler would co-star in a film together.

George (Alexis Arquette) is modelled on Boy George from Culture Club. The song "I'll Tumble 4 Ya" by Culture Club can be heard in an earlier Adam Sandler film, Billy Madison (1995).

Charlie Sheen was considered for the role of Glenn.

Betty White was considered for the role of Rosie.

The first of many Adam Sandler movies to feature Jon Lovitz, even though they both cameoed in Coneheads (1993).

Both times the banquet hall dumpster is seen, Robbie's jacket is the same color.

In the bar scene near the end, Sammy(Allen Covert) and Robbie(Adam Sandler) talk about The Fonz. Henry Winkler, who played The Fonz, was in The Waterboy with Sandler and Covert later that same year.

The bride and groom on top of Robbie and Linda's wedding cake resemble the characters of Robbie and Julia, who marry each other in the final scene.

Julia carries a bouquet of daisies in her wedding to Robbie. Drew Barrymore's favorite flowers in real-life are daisies.