A behind the scenes look at the making of "Aliens in the Attic".


The aliens are coming and their goal is to invade and destroy Earth. Fighting superior technology, mankind's best weapon is the will to survive. 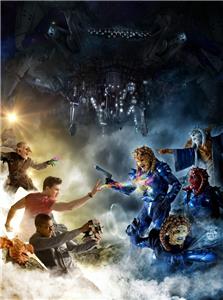 Insatiable, marauding aliens, The Nekross, invade the Earth in search of magic. Teenage schoolboy wizard Tom Clarke and his friend Benny Sherwood lead the defense against them.

The series was described as "Harry Potter meets Doctor Who".

Gwendoline Christie would later go on to star as Captain Phasma in the "Star Wars" films.

The show was created to fill the schedule gap left by the "Doctor Who" spin-off "The Sarah Jane Adventures" when it's lead actress Elisabeth Sladen fell ill, she died in 2011. The show, however, has no relation to the "Doctor Who" universe.

Annette Badland, Dan Starkey and Brian Blessed have all appeared in "Doctor Who".

Gwendoline Christie also joined "Game of Thrones", the same time as this series.

It was not considered that the series could be set in the "Doctor Who" universe.