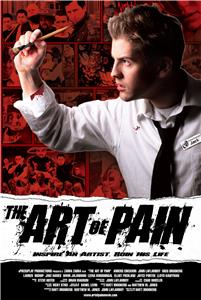 A lazy painter learns that great art comes from pain as his life is ruined by a ninja.

INSPIRE AN ARTIST, RUIN HIS LIFE - The peace of the mall movie theater is about to be shattered! Jack, a stagnated painter, must train new theater employee Marcus, a rage filled, motorcycle-riding martial artist. Marcus hits on Jack's actress girlfriend Sharon, and really gets the goat of comic-loving sci-fi geek, Nick. More tensions flare when Jack's boss announces a coveted career launching painting contest. Turns out that Marcus studies the art of Ninja under the diabolical, pastrami-loving Nobu. After dishing out a nasty kung fu beat down, Nobu decrees that until Marcus can demonstrate his creativity, he will never earn his black belt. With a psychotic need to prove himself boiling up, Marcus latches onto the words of his hero, zombie film maven George Romano: "Great art comes from great pain." Suddenly, Sharon and Marcus are in bed together and Jack has found some gut wrenching inspiration to paint with. Wowed by his friend's new zest for art, Nick presses Jack to begin ...


The movie theater where The Art of Pain was shot at is the historic Landmark at the Century Mall. The director, Matt Brookens, wrote the screenplay while working there as an usher. "I always wanted to see what would happen if somebody were to fall off that ledge in the middle of the mall," states Brookens. "I finally got to throw someone off in the film!"