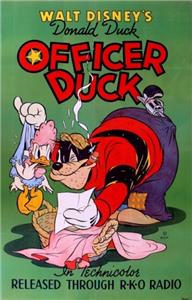 Officer Donald Duck (Officer #13) is assigned to apprehend a criminal named Tiny Tom. Donald assumes by the name that he'll be a pushover but when he reaches Tom's hideout, he discovers "Tiny" Tom is actually a hulking Pete who immediately disposes of Donald. Donald decides to use strategy and is able to reenter Pete's house disguised as a baby who Pete surprisingly warms to. When Pete discovers Donald, he chases him down the street but is finally apprehended by Donald's marching police colleagues who make the arrest. {locallinks-homepage}